The answer is Nookie. So now you know. And the answer to the next question is yes, box sets, and yes, all of it. And yes, Daddy Armshouse too. Brilliant eh?

Now thats the way to start a blog! Boom, straight in with the news, and then dont follow up with any more information for ages, or answer any questions! Wheeee....

Unfortunately there really isnt a good way to follow on after that. It kinda blows everything out of the water, so I am gonna do a sort of "hit points" blog to bring you all up to date!

1. As of writing, we are down to the last few Hecticly Hectic Bundles. Which is amazing because we DOUBLED the number of bundles, and still, pretty much sold out in a week. Big thank you to everyone who supported, you are all awesome. And yes, Hect06, 07, 08, 11 and 11R are coming soon!

2. We are about to get the test presses on KF176 - which is the "free" bonus Trip To The Moon Dubplate Mixes vinyl. Once the tp is confirmed as good, I will put in an order for that and we will work out how those who are due the free record will collect it, and how others who want it anyway will be able to get it. To be clear - if you had the LONG wait until you got your box set, you are due this record and will get it for free. If you bought the Box Set from us at all, you will be next in line to get it - I will order enough to cover a single copy of KF176 for every box set we sold from the Kniteforce store. And if there are any left, I will make them available on general release after that.

3. The NRG Box Set is due to land in July. There will not be a presale. There will only be 500 on the initial run. No doubt many will complain that its not enough and they did not get it, but it will be a refreshing change from complaints about how people had to wait for their record for ages because of a presale lol. I am trying it this way because of lessons learned with the Acen box set. Likewise, all will be sent with tracking etc.

4. Proper Talent 04 and 05 are on their way - hold tight! The original versions of Divine Rhythm, and the unreleased mix, and a Dope Ammo Remix! We will follow with other classic Dj Rap releases such as Spiritual Aura...

6. The House Crew Box Set is titled "Ozomaltiz Return: Part 1" and is almost ready to go to the cut. And obviously its amazing. The second Acen Box set is in progress.

The Box Sets will all have space between them, I promise. Each one takes a long time to put together, so they wont all come at once...err...I hope.

7. We are expecting KLEG06 Q-Project - Champion Sound to land in the next 10 days or so. We will send out ANY of the presale orders that have that ALONE. But it is 2 months earlier than quoted. We ordered that and also the highly anticipated KBOGR46T Baraka, KBN09 Phat & Phuturistic and KBN07 Asides & Nut-E-1 at the same time. Those other 3 records that make up the Old Skool Jungle Bundle were expected in July, but are now coming Mid June. As ever, we will send out as fast as we can. Bottom line is, all preorders should be on their way by the last week of June at the latest. Unless, you know, disaster.

8. Now that we have cleared out all the lost, missing records and Box sets, we have finally done a stock check. And we have a LOT of 1s and 2s of currently out of stock releases to add to the store. That will happen with next weeks bundle, most likely...

9. Next weeks bundle is amazing, but a heads up - we only got 270 of the Jonny L vinyl. I expect it to sell out on the first day of release, honestly. So keep your eyes peeled... 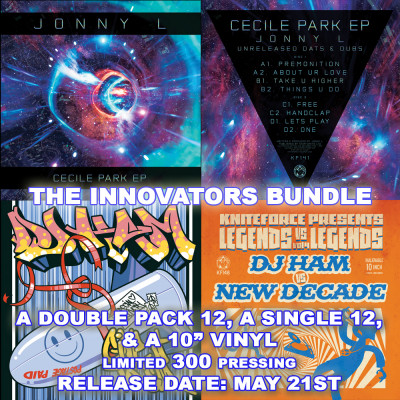 10. We will follow that 2 weeks later with these two mini bundles: 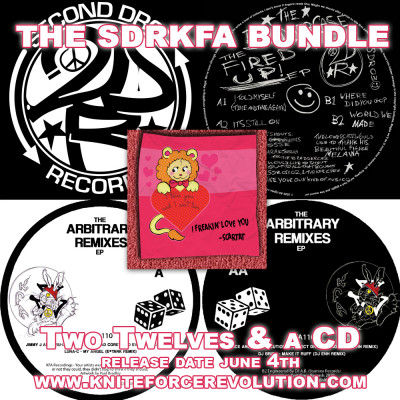 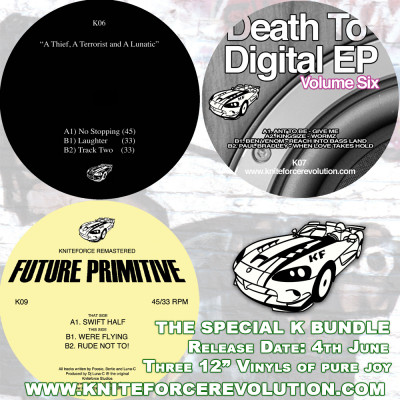 Basically, we will have new releases every 2 weeks for the forseeable future! We are slowly becoming more like a record shop in that respect, with records coming out on a weekly basis eventually...and like a record shop we will have upcoming flagship releases such as Liquids new album, the above Box Sets, Jonny L's Hurt You So, and many more, as well as our usual chaotic putput* from Knitebreed and Remix Records, the relaunch of Malice, new stuff from Influential and of course releases from our friends Out Of Romford, JAL, Hectic and at Liftin' Spirit and Lazarus and 4 The Core...and smaller releases from new labels. Unlike a normal record shop, more and more of these will come through us and only us, and if they sell out, you will not see them on other stores unless we repress :)

If you would like to hear any of the new music, your best bet is to tune in to the Promo Show with Lowercase, or any of the Kniteforce Radio shows really...

*putput was a spelling mistake, it should have said "output". But Chaotic Putput is way funnier, and may well be the title of my next EP.