Well, this is chaos. New releases and why there are new releases....

Okay, so there are a bunch of new releases, and the new KF slipmats, on the store. This is terrible timing, and was not planned at all, so I thought I better offer an explanation as to why.

In the end, its Baby Ds fault lol.

Haha, I am just messing. But here is the thing - Kniteforce and Dope Ammo have come up with this awesome deal where they are doing some new D'n'B remixes of some total classics, and we are going to add old skool mixes and handle the vinyl releases. The first one is DAR028 - Baby D - Let me Be Your Fantasy (Dope Ammo & Dj Hybrid Remix).

Now, this has been a bit tricky to pull off, for very music businessy reasons. As happens occasionally, a simple thing like putting a remix out can be quite complicated, because the artist is comprised of a few people, the publishing is owned by a big company, and the remixers are doing a digital release, and then a vinyl release comes along, and somehow, we all have to get on the same page with release dates and planning. 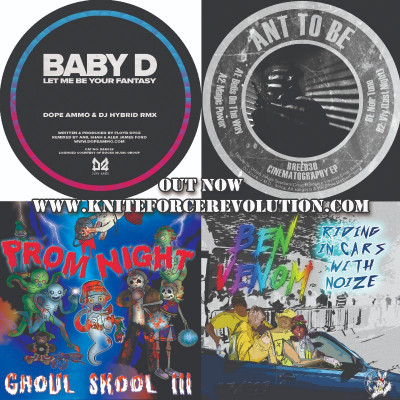 In this particular case, it was messy, due to the vinyl option coming in very late after all had been decided, forcing release dates to change and...well...it was just messier than anyone involved would have planned on even tho everyone involved was keen to make it work. Whatever, the point is, it was ready to come out the vinyl had been ordered, and then Moondance did this big promo thing advertising it out of the blue, so we had to get the vinyl rpresale live RIGHT NOW TODAY.

THIS WAS A BIT OF A SURPRISE. (that was understatement, in capital letters haha)

Now, you know us. And I know you. No one likes paying extra postage. And my plan was to have the new releases ready for this coming Monday. And I am waiting on an update for the delivery on DAR028 / Baby D. But if its being advertised for sale now i have to put it up. And if i am putting that up, I figured it might be best to get the other things up as well, just to save you regulars on postage.

I was actually hoping to wait until the Baby D vinyl had landed before putting things up. Because, while its meant to be soon, the pressing plants are all quite backed up. Why? Because all the major labels that aborted releases in March and April when Covid arrived, have now decided to pile those orders on.

So its chaos basically lol. But then, its Kniteforce. What did you expect?

Now, because of all the delays at the Pressing plant, we are not expecting any more releases until late in October, at the earliest.

And Trip To The Moon Box Sets pre sale will go on sale in November and we are doing all we can to make sure that is in time for Xmas.

And the Mystery release is expected to be delivered this week, so we will get that out to you asap!And once we have those orders out, any left over Mystery release will be added to the store as well!

But yeah, that is why there are a ton of new releases, all of a sudden! So order at your pleasure!

Oh, and we found some KFWs as well, so updated the stock there...