This is absurd really...

Okay, lots to talk about so lets jump right in. First off, the “whoopsies!”

Number one, sorry for the delay on sending out KFW09 and KFW10 and KJAL02 and KJAL03. Basically, the JALS landed as planned, but the KFWs, which should have arrived with them, just didn’t. Instead they are coming this week. So that has delayed sending out the new releases.

Number two is the issue with KJAL01, which is that we cut an abbreviated, shorter version of the A side by mistake, and no one noticed until early last week. Its actually quite impressive how every single person, from JAL, to myself, to the KF Djs simply didn’t realise, but as soon as we did, we hit the breaks on that. It is being recut with the correct full length mix,  and will be available asap. So that was a bit of a group “duh” moment, but we caught it before we pressed a ton of them, so annoying, but not too much of a mess. I am just glad it wasnt released or sold to people as it was wrong!

Lets move on to excites. Oh, I have forgotten them all…haha. Well. The new releases seem to be doing rather well, so big ups to everyone for the support there! I am always really grateful for all the support we get from all you lovely people, it makes this work so wonderful, even though it can be extraordinarily exhausting!

Did you listen to the podcast interview I did with R.O.A.R yet? If not, heres a LINK to that. Its just me banging on about the rave scene, but a few people listened and enjoyed it, so thats nice. I do mention my forthcoming book (The Rave Commandments) in it, which is now about 50% complete. So thats one of the things I have been doing in my downtime. haha, downtime. There isn’t any. Here is a brief overview of the next few months for you to enjoy…

The Acen - Trip To The Moon project is in full swing, in that we have had almost every remix back, the artwork is soon to be complete and then it will go off to the cut. It is looking like a 5 vinyl box set, coming in a custom box, along with a slipmat and bonus material. Its pretty epic, perhaps even the most epic? The idea will be to presale this in early November, with a release date set for early December so that people can have it in time for Xmas :)

After that, we will be remastering and remixing the NRG back catalogue. Although we still have a few of the Liquid Crystals remasters to come (including ROW03, which we managed to source recently). And thats not to mention Liquid is working on a new album for us as well for the new year.

We have the next Out Of Romford lined up and its superb! And of course more from JAL, including some proper classics such as the both the original and remixes of Take Me To The Top / Above The Clouds and Sweet In Pocket.

Hectic also has a nice selection of winners on the way. I am expecting test presses on KHECT02 The Eliminators and KHECT03 Ramos & Supreme & Sunset Regime to be here imminently and the finished EPs to be available for sale early October. We also have incoming remixes from myself, Hyper On Experience, Pete Cannon, NRG and Try Unity, not to mention Abyss and Sunny & Deck Hussy and more. I have heard some of the remixes and they are, well…brilliant. What did you expect tho?

TUNNEL02 on Time Tunnel, I am reliably informed, is going to be cut soon as TUNNEL01 has basically sold out. We will also have the first vinyl release from Lazarus Recordings and a new EP from me on Second Drop Records as well. Influential has already had its first EP cut, but we have new material from old….or maybe mid? Skool jungle legend Sike, and the tunes are PHAT!

There is the limited press of some old Jimmy J & Cru-l-t tracks that had never seen vinyl before, coming on Remix Records, to be followed swiftly by new music from Stu Chapman - his last EP sold out double fast so that will not want to be missed.

Knitebreed has a new EP from Worldwide Epidemic (Breed31) and label stalwart Ant To Be (Breed30), both EPs are darker than our usual fare but they are damn fine releases. And Ant also has a limited 12" we are gonna put through our store when it is ready as well....

KFW has new music coming from DS1, Amaretto, Hannibal Selector, Beeno and Sub Fundation, all of which are as bad ass as you would expect. Kniteforce does of course have some new music too, from the legendary Coco Bryce, and a new Industries Of The Blend EP, Legends Vs Legends VOl. 3, and Ian K’s Debut EP, Liquid Crystal Remixes, plus of course Remixes Parts 14 and 15 have also gone to be cut. Oh, and we have repressed Vinyl Is Better Volume 1 for all those who missed it when it came out in, like…err…1994?

And KFA has the thrilling Ghoul Skool 3 double CD album coming, as well as two thunderous EPs from Ben Venom and Dj Deluxe. Not to mention,  a special "Arbitary Remixes" EP on vinyl that will be very limited (KF110), as well as Best of Digitals 4 on “K”. Speaking of “K”, new Signee Knuckles has his debut vinyl EP coming out on that very soon.

All of these things are works in various states of progress, most completed or close to completion.

And that brings us too our next batch of releases! The release date for these winners is the 7th of September!

First up there is the forthcoming debut vinyl from 4 The Core records, featuring the frankly over talented Dj Revive. The ep is superb, and the weakest of the tracks on here is likely my remix lol, which is a testament to the quality of Revives work on this EP! 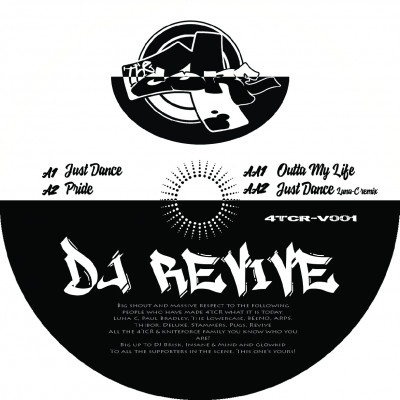 And released with that will be the TOP SECRET Kniteforce project. This one has remained very much a secret and will continue to do so, but let me see if I can give you some details anyway…A small list of facts! 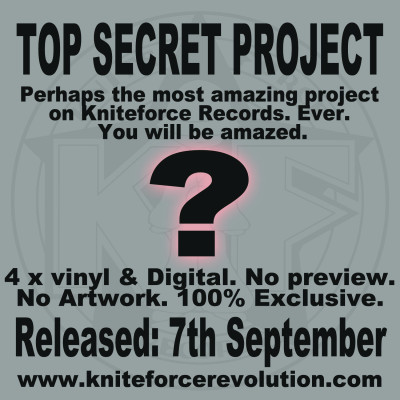 1. It is four x four track vinyls, plus bonus tracks too….
2. It is a KF Catalogue number.
3. It is limited to 300.
4. It is lavish, in that we have spared no expense with the content or the packaging.
5. It contains a remarkable amount of different talent, including some very big names.
6. It will be cheaper to buy it while it is still a mystery product than once it is revealed.
7. It will be collectable I think, and one of those ludicrously expensive discog releases in the near future