The Boxing Day Bonanza and the reasons for it haha!

It seems like I do a blog alomst weekly now, which was always my intention, but I never used to have enough to say. Now it seems I always have so much going on and can't fit it all into a sinlge blog even if I do one weekly. Ah well...so, to business:

First things first, UPDATE: We have got pretty much ALL of the Hectic Bundle out now, we are getting the majority of the merchandise out this week, and we have started getting the envelopes ready for the first 500 Acen Box Sets. We havent actually got the records yet, so fingers crossed for that...But I will keep you all updated as always....Now, lets have a little talk about the future... 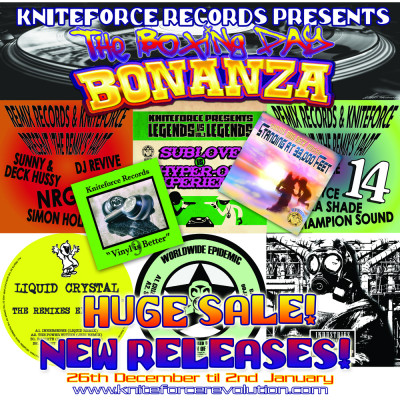 Those of you who are super observant may have noticed we did not do a Black Friday sale. Or a Cyber Monday sale. There are two reasons for that, both pretty fundamental. The first was, our new website is super duper awesome, but we dont actually have a way to do a sale right now. So we literally couldnt do it. And the second is, the Acen Box Set and Hectic Bundle and Merchandise orders were so overwhelming, we also, literally, couldnt do it.

So we didnt do it.

As you all might have noticed, we at Kniteforce have been quite busy getting records made, and slowly increasing how much we could do over the last year. And all was going well, all was going according to plan, a nice, gentle, increase in output, carefully controlled incremental growth, lovely!

And then it all went a bit wonky lol. The record presses all got delayed, and our deliveries got delayed, and everything ground to a halt. It messed up the release date with the Hectic Bundle - which was very popular, and that is fantastic, but it was meant to be out on the 2nd of Novermber and only went out this week, which is considerably less fantastic. And all the records that were meant to come out AFTER the Hectic bundle in November, just...didnt arrive. We had space for the Acen Box Set at the press, so the presale went live as planned, and that was insanely popular and is still selling now, which is brilliant, so I dont want any of you to think I am complaining, not even for a second, but the combination of "very late popular bundle" and "records not arriving" and "biggest release we have ever done" and "very unexpected levels of merchandise sales" rather buggered up the entire release schedule lol.

Now, what we have is...a lot of very late records about to arrive. That wouldnt be a huge issue, except straight after that, more records are about to arrive. And then after that, you guessed it, more records. And as wonderful as that is - we all have limits lol. So I need to spread out the releases a little, but I also need to get these ones out and moving, to make room for the following records. We dont have enough space to store all the things!

And so, the Boxing Day Bonanza. Boxing Day is the day after Xmas in the UK, and it is traditionally a day for sales, so we figured "lets do a sale and also put up new releases". I dont actually know which of the above will be here with us because, as mentioned a few times, the record press is mental at the moment, so we kinda just have to wait and see. But either way, we will have a nice sale to shift some older stock, have some nice new releases, and will no doubt throw in some super bargains and unexpected funzies! And as its us, we are just gonna do it from the 26th December, to the 2nd of Jan (or while stocks last) with the biggest discounts on Boxing Day, but good ones all through the week. So yeah...thats what we are doing!

Thank you for listening to another long, Luna-C ramble...