Supaset 21, Knite Club, Dj Rap, Influential, And All The Other Blah Blah!

Its Blog day - and what an epic one it is going to be! So lets start with the big stuff, and work our way through the other big stuff til we get to the, er...big stuff lol.

If you visit the Knite Club site now, you will find a link to list and to download Supaset 21. This set is a huge mashup of loads of forthcoming releases on Kniteforce and its sub labels, but its main purpose is to advertise the event on the 17th of September.

I am asking you to share the mix, and to do so by sharing Knite Club web address. I am hoping the mix can function as a sort of viral advert for the night. Please post it on all your social media pages, and basically make a lot of noise about it? I would really appreciate it! Plus, I think you will enjoy the mix...there are some truly epic tunes on there. And this is just the first half of the set...should this work as a way to sell some tickets, there will be a part two. its a bit of an experiment you see? And for it to work, i need your help...so....please share!!!

We have two epic new EPs from Dj Rap on the Propa Talent label - Intelligent Woman and Run To Me. And we are pairing those up with two amazing new releases from the Influential camp but Dj Sarin and Hannibal Selector. Plus...a free CD with the bundle, although we only have 100 of those so the bundle is likely to fly out. So grab while you can.... 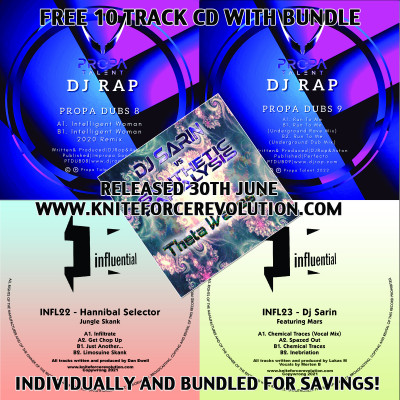 After this weeks releases, we are actually going to take a break on the releases for a little bit - I am sure thats a relief to some of you. It has been too much, but my hand has been repeatedly forced by events. However, simply put, we have now reached the end of the "in stock" records that arrived in the avalanche.

Which brings me to...

Yes, updates, of which the news is pretty much as it has been: no information. Jeez, I am sighing in exhaustion just writing it. But we have had nothing more from the plant since the main enormous delivery that was based on the 4th of April schedule they gave us. Many records that were meant to show up did not, including Liquid Crystal Remixes, The Sandman Remixes, Stu Keatings EP on K Records, Future Primitive - VW Remixes, Eko - Renegade Rewind, Ramos - Feelins EP, and not to mention the very obviously not here Ray Keith Box Set, Dj Force & The Evolution Box Set and Baraka - A Million And One. Oh, and the Acen Dubplate Mixes.

Plus some that were due end of May (ha!) are now joining the late pile, with new EPs From Wislov, Ross Fader, TNO Project and others not arriving, and not to mention Dj Solo, which by my calculations is now about 7 months late. And Nookie's Box Set, which, sod knows. I dont like to swear on my blog too much but fucking hell this is absurd.

We have had a half of a half delivery of KLEG01 - Champion Sound original mix and KLEG15 - Rikers Island. And by that I mean, only one of the two pallets showed up, so only half of each of those records actually arrived, and besides, they were meant to ship with KLEG05 - Beyond This World and KLEG11 - Deep Concentration, neither of which are here, or even mentioned.

All our new music is being done by our new pressing plant, who have put on an extra shift just for me and one other client, which is very nice of them. And we are moving what we can from our old plant to the new one, but with things that are due and overdue, its a tough line to walk. To move the parts would be expensive and difficult and time consuming...and lets face it, they will probably get lost or dropped in the sea or eaten by a dragon or something...so while it is worth it for things which are not yet expected, we kinda have to leave what should be here already or that is due, with MPO and hope they finally send them soon.

All I can say is, I cant WAIT to be outta there. I have never before seen such a high level of incompetence, and thats saying something - I am from the UK where incompetence comes as standard. I don't expect things to be on time, or even right first time, or the second time. If something shows up 3 weeks late, broken, and is sent back and replaced with something wrong, and then that is sent back and lost in the post before the correct thing arrives and is delivered next door 2 weeks later, I regard that as a win. Its what the UK calls "professional".

This is a country where, and I kid you not, it has taken 10 months and about 7 different plumbers for my landlord to get a small leak fixed in our shower.

It is a place where you set up a Post Office Business account, and every person you speak to tells you to do different things and that whoever you spoke to last had it wrong, and each time you drop the parcels off, you are told you got it wrong by each different member of staff, but none of them actually know how to do it either.

So you know, I am used to absolutely hopeless incompetence. But even the utter cretins that "manage" things in the UK are better than MPO. A word needs to be invented to encompass what MPO does, because their endless confusion, lack of communication, inability to schedule and general fucking up is pretty much an art form at this point. I genuinely dont understand how they havet just fallen into the sea. Annnywaaaay....

The bottom line is, after these releases, we dont have anything else we can really put out, so if there is a silver lining anywhere in all this mess, its that we can all have a little rest. And I am really hoping me saying that means we get a delivery tomorrow lol.

I wanted to let you know that while I and the other KF council have been managing all the record deliveries, it hasn't stopped deals being done and music being cut, even though it has slowed me down a little bit. So...where are we? I have made a deal with The Criminal Minds for a wicked album and some back catalogue represses. We have a new double EP from Secret Squirrel which is very exciting. Liquid Crystal has bought in The Chromatic EP Vol. 4, so thats a treat. We have a new EP from Ron Wells. We have some new music from Ray Keith and some tracks found on old DATs as well - proper epic that is. Acens second Box Set is close to completion, as is the second House Crew Box Set. Bay B Kane has supplied me with some more music to cut as we are doing a run of releases on Ruff Guidance via my site. Al Storm and Euphony have given me a bunch of EPs to cut for their new label Bad Onion, and the music is incredible. Theres a Jimmy J & Cru-l-t Box Set and represses just gone to cut and so much more...

There are also a great number fo things that are sort of floating inbetween cut and arrival - the Symphony Sounds EPs (Neuromancer and Structual Damage) of which the tps are expected any time. And then the Shades of Rhythm Box Set too, also of which test presses are now due (from the new pressing plant). Likewise there is Wots My Code, Alex Jungle, Dj Stephano, Jon Doe, The Criminal Minds, Renegade Bob Ross, Ramos, NRG, Legends 5, Phuture Assassins and so many more. But we are just sort of waiting now.

In a nutshell, it remains crazy busy, but its very hard to really say when anything is actually going to show up. All I can do for now is keep on keeping on, and of course, keep on keeping you guys up to date as and when things happen!

So thats about it for this blog. Once again, I urge you to share the hell out of Supaset 21, and I will see you on the other side. Of the week that is. Not, you know...death. Thought I better clear that up is all...