KF176 Acen - Trip To The Moon (Dubplate Mixes) - the promised record to apologise for the delays....is very delayed...Update

This is a quick blog to explain the situation with the promised free record:
KF176 Acen - Trip To The Moon (Dubplate Mixes) 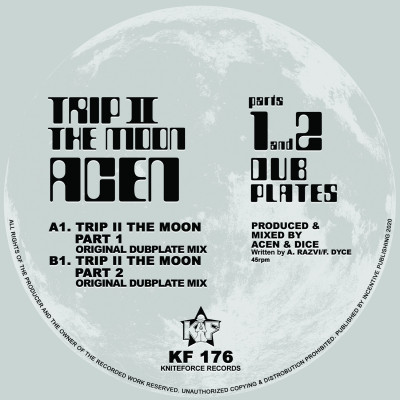 To recap (because oh my god this is ridiculously late)…Due to the Acen Box Set being delayed to many buyers way back at the beginning of the year, we told those late receiving customers they would get a free record.

We then cut and ordered the record.

And here we are, nearly 6 months later, without the record.

There is a special sort of irony in the fact that this record, to make up for the late box set, is so very much later than the box set was. It would be funny if it wasn’t so terrible. Sigh.

Now, it SHOULD have been here in July or August. It is one of maybe 10 records that we have in production that should have arrived in August. In fact, August should have seen releases from Fizby, Innercore, Dee Sub, DS1, Sub Foundation, Nutty Tax, Sandman, and New Decade as well as this record.

And before Xmas we should have had the House Crew Box Set, Nookie Presents Daddy Armshouse, Hectic remixes and many other very much anticipated records…

….none of the above have arrived. Many of them are now expected to land early in the new year, some of them are pushed back to March or April next year.

I do not know when KF176 will be with us. When it arrives, I will email everyone who bought the Acen Box Set and who got it late, and you will get a private link to purchase the record for next to nothing (you will have to pay for postage tho). I will also email everyone else who bought the Acen Box Set with a private link to a discounted version of KF176. If we have any left after that, it will go on general release.

As for the rest of the releases? We are in a queue. When we get to the front of the queue on any of these releases, the records get pressed. KF176 should be close to the front, right behind the KF155 - Liquid  - Lethal album and KF154 - Jonny L - Hurt You So (Remixes) Our pressing plant will squeeze in anything they can in any gaps they have in the meantime.

I absolutely understand that this is ridiculous. But the current turnaround for a vinyl record has gone from 3 months to 9 months since August. Meaning, if I cut a new release today, it won’t be here until maybe May or June 2022.

Sorry I dont have better news, but this is how it is now, so we are dealing with it as best we can!