Hows you all? I hope well. I am really sorry for the slow and late and delayed blog post. I think maybe the time has come to just admit that, with the amount of stuff going on, its getting a bit tricky to write blogs on time haha! but while I am here, lets get up to speed!

First off, humble apologies for the delay on getting orders out. We only got KFW09 and KFW10 delivered on Friday, so that delayed all the orders by about 2 weeks. Much annoy. But now we are getting the orders out as fast as we can, and thank you for your patience!

Next up, we got a bunch of test presses recently, but in a very rare event, two of them were problematic. INFL19 had some major catastrophe happen during the cut as halfway through one of the tracks the music just turns to kkkkkkkkkssshshhshshshshshshshshshhshs. I have never, in my life, heard a tp do this haha. So on one hand, thats amazing! On the other hand, thats got to be recut. And KF133, the superb EP from Coco Bryce also had a strange issue where we need to get that fixed, so that has also gone back to the cut.

Still, if you look at the ticker, its not like we wont have any new releases for you soon. In fact, I put together one of those nice "16 pics of new releases" for you, and then I needed to do another 16, and I still didnt have everything on there....so rest assured, lots of proper wicked music is coming!

Many of you have been asking when the Mystery Project will land (in the next week or two we expect - the pressing plant is obviously having a delay or two here and there, but still) and when the Acen Trip To The Moon Box Set will be available for preorder? That will be early November. Its almost ready to go to cut etc, and we want to have it all 1005 ready and in time for Xmas, so we are starting early on that!

People have also been asking about the next two Hectic Represses! They are ordered and should be with us very very soon! Along with plenty of other goodies. One of which is Ghoul Skool 3 Prom Night album on KFA, our much anticipated and supremely SPOOKY (because thats how its spelled grrr lol) double CD. Containing 24 excellent slices of bloodthirsty breats, kicks and bass, this one is gonna fly out - probably after turning into a bat or something. I dont know, Halloween and stuff. Point is, if you wanna know more, we have a big reveal event on our KF radio and Twitch, hosted by KFA don Shane of the Saiyans, tomorrow at 7pm Eastern. Here is a link:

What else can I tell you about? Well, we have a brand new EP from Dj Ham and it is EPIC and excellent. But thats to be expected, right? Well how about this...We have a brand new EP from Phuture Assassins coming out on KF, and it is vintage 1992-1994 era old skool hardcore. You are going to love it. To me, it sounds like the perfect follow up to the classic Roots'n'Future EP. We have also been in talks with another old skool ledge, Isotonik, and we are super excited to be vinylising and pressing his new EP, with represses and remixes of his classic older work on the horizon as well!!!

I recently did a mix and interview with the one and only Dj Hixxy on Rinse FM. If you would like to hear some new stuff, including the forthcoming remix of Trip To The Moon by Danny Byrd, not to mention me rambling on like a damn idiot, then you can do so here:

Me, being a prat on Rinse FM

Now, I wanna big up some excellence from some of our label friends, if you dont mind? First up, my old pal in charge of the Time Tunnel label has put up presales for Vol.2. Definitely worth a pre-purchase, considering how fast the first sold out. And its worth mentioning, we were lucky to get the ones we did of the first EP. We will likely have a few of the second EP on the KF store, but yeah, its also likely that we will hve less, so:

Also, for those of you who like things proper d'n'b and old skool, our dear frineds at Liftin have some great stuff going on. This fantastic bundle for one:

And this wicked competition for two...

I love how much good stuff is going on in this scene right now. Its so excting! I feel like its 93 again. I know 93 isnt always the year people like to love the most, but for me it was when KF started hitting its stride back in the day, but I still had no idea what was going on really. It was a good time, is what i am saying.

Next up on the KF store will be Ant To Be's EP, K05 (Best of Digitals Vol.3) and the KF slipmats, along with KFA106 - Ben Venom and the repress of KFCD01 - Vinyl Is Better Vol 1. We only have limited number on all of those, just so you know!

So I will leave you with this teaser artwork...and we will speak soon yes?

Nice one, my friends! 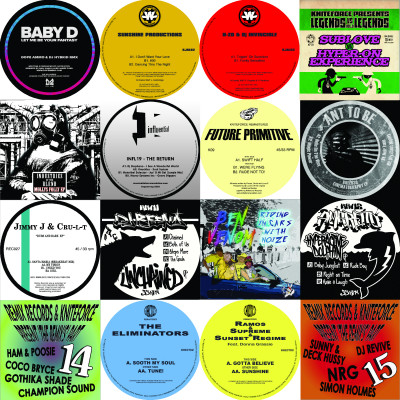