Here is what You Need To Know, and New Releases! 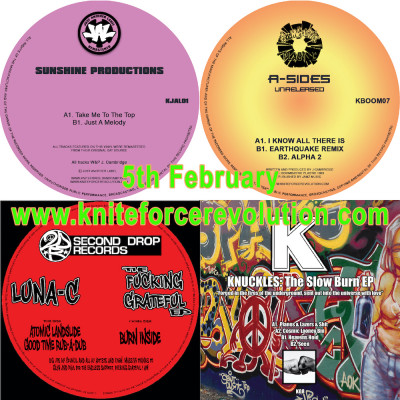 Hello everyone - some much needed info here, so please read carefully!

Over the last 3 weeks, our pressing plant has notified of 14 deliveries on their way, via the usual method, delivery notes. In the past, when we got a delivery note, we would have the records within 48 hours, because it means the records have been pressed, packed and shipped.

One we had to pay customs charges on.

One arrived with no notification.

The others are stuck in customs.

The bottom line is, no one, not the border control, not customs, not the courier services, knows what to do with imports or exports. Some companies are doing this, some are doing that, some are charging import taxes, some arent. This is all because of...I wont say it, because then certain people will go "no its not, its the fault of the rain" or some other crap, anything but admit "it" was a crap idea and "it" has been terribly implemented which is why no one has the foggiest idea of what to do.

Obviously, Breed31 - Worldwide Epidemik, and KF142 - Remixes 15, are two of the ones stuck at customs, because why wouldnt they be? We only have 300 plus orders waiting for them, so yeah, go ahead, be stuck at customs while other things we dont need arrive. Fucks sake. Sorry. But this is so relentlessy annoying and stupid, it wears a person out...

Anyway, all of the delays with these EPs and with the Acen box set have made me rethink how we sell records to some degree, and the bottom line is, I am not willing to put up for sale any records we dont actually have in our hands. And that will be the policy going forward. If we dont have them in stock, we wont sell them at all.

We will, maybe, do an occasional pre-sale. But only if it absolutely demands it - box sets, or the Baraka repress for example, because this chaos is ridiculous.

The immediate effect is that INFL19, the new Influential EP, will not go on sale tomorrow, as it is one of those that should have been in our hands weeks ago, but is instead sitting somewhere at customs.

So the new release line up has changed - tomorrow, we will put up K08 - Knuckles instead of INFL19. This means ALL of the tunes going for sale tomorrow are in fact, in stock, and can be sent.

As mentioned before, the Kniteforce store prices will change. I have already warned you all that the prices will be going up due to all the reasons, but we also had to change the structure of how we sell things, because of the new rules for VAT and the fact Kniteforce Limited is now a VAT registered business.

The bottom line is, you can order as normal, put things in the cart etc....but the price of things will change at checkout:

If you are in the UK etc, VAT will be added before you pay.

If you in the EU, the price of records will actually go DOWN on the store, because we will not be charging you VAT.
BUT you may have to pay your own countries VAT charge when the package arrives with you. Your own country will decide how much and etc and there is little we can do about that, sorry.

And if you are in the Rest of The World, your record prices may go down, but nothing else changes - if you usually pay import or VAT duties, you still will, and if you usually dont, you get records a bit cheaper, so thats nice!

We will, of course, still put low value on our customs forms. Thats the good thing about value, it depends on the perspective.

Seeing as you have likely read the above, you can take this with a pinch of salt, but apparently the balance of the Acen Box Sets will land with us on the 22nd of February. That is, if they dont get to customs and just...sit there. Because of "it". Still, its good news in that the pressing plant finally gave us a date other than "hopefully before March" which is what they were saying for months.

So one last thing - look, I know things are a confusing mess. Peoples deliveries are taking ridiculous amounts of time. Some people are just getting the box sets we sent out the last days of December. The postal service worldwide is in chaos, and the UKs is especially bad. But i want to thank you all for being so freakingly awesome and nice about things. I am as frustrated as you, believe it. All I want to do is release wicked records and then have you get them in your hands. None of us like the current situation.
But I am grateful to have so many awesome KF supporters, and I thank you for sticking with us through this irritasting and often idiotic time.