I guess I will be blogging a little more frequently from now on, because a lot is happening, and things keep changing so fast that keeping you up to date is even more of a prioriy. As any of you who follow me on social media will now know, we have been told another 8000 records shipped to us on Friday, including some of the pre-sale we have been waiting on for so long:

All of those will be packed and shipped as fast as possible. We have not yet had notification that the KF181 House Crew Bonus 12" has been shipped, and of course we will need that before we can send The House Crew Box Set out. Likewise, no news on KBOGR45T being shipped yet either, so the Baraka bundle is waiting for that. But I expect to hear both of those have shipped very soon, probably this week. And we are ready to pack and ship as soon as we have these things, so hold tight, its all coming :)

On top of the above, we also got told we are getting another 9 titles. Ironically, and a little bit annoyingly, we ordered both the "Nookie Presents: Daddy Armshouse" Box Set and "Dj Force & Evolution: The Perfect Dream" Box Sets the same day last year. We also saw that both of them were due to be pressed on the 4th of April to come to us. We could have put either of those up for sale this week so we chose, randomly, Dj Force & The Evolution for Thursday, and Daddy Armshouse for the end of the month.
So obviously, it is Daddy Armshouse that is in the 8000 records that have just shipped lol. Fecking typical. Not that it really matters, I fully expect Dj Force & The Evolutions box set to ship imminently as well for the reasons stated, but still. Now we will have the Daddy Armshouse box set sitting here looking and sounding amazing and functioning as a huge wall of records to climb over every day until the end of the month lol.

But enough of that....for now...lets talk about a few things I wanted to say while we have this final bit of breathing space...firstly, yes, this is still going up for sale on the 7th of April (Thursday): 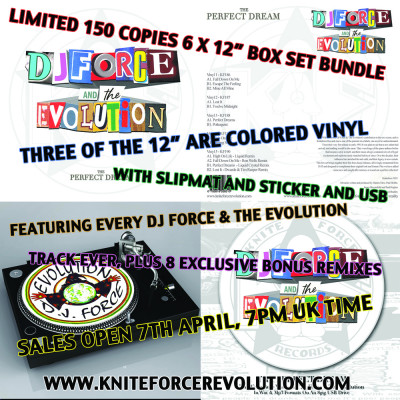 As you can see, it comes with all sorts of goodies and is limited to 150 for the full bundle. After that bundle is sold out, we will have the 5 vinyl version and some of the bonus 6th record for sale. But none of the extras such as the USBs and slipmats. The thing is, I have been battling with how to do the box sets for a while. I love the format, but a lot has changed in the scene since we did the Acen one, and I really want to standardise how we do it to some degree. It is tough to do because everything around me keeps changing - the prices for the vinyl and cut and packaging, the competition, and the fact I do not like to stay still. As I have mentioned many times, I live to some degree by the quote from Brian Eno:

"Whatever worked last time, don't do that again"

Which is obviously a joke, but also...not. Staying in one place is the death of art, the death of music, and in my experience, the death of business. But for now, the point is, I am trying to do things a little differently as we move forward with box sets, both to keep it interesting and to make them more valuable to the customer.

I cannot do this retroactively, so Ray Keiths Golden Years is going to stay at £75 plus Vat, but yeah, thats the pricing plan on box sets moving forward. I am sure anyone reading this will understand that the costs keep going up, and besides that, when licensing a ton of music and getting remixes for an act like Shades of Rhythm or Nookie, the cost of putting a set together is quite high. So some box sets will always cost more for us to make than others, but still, it should average out!

Speaking of Shades of Rhythm, thier set is about to go to the cut! And it is AMAZING! Remixes from Blame, The House Crew, Nookie, Altern 8, Sunshine Productions, Jimmy J & Cru-l-t, Ramos and me as Luna-C...not to mention a selection of thier best tunes remastered and sounding superb. Which was quite hard to do as they really have made a lot of best tunes! Anyway, I digress...so...err...yeah, Dj Force & The Evolution opens for sale on Thursday at 7pm.

Next I want to talk about Nine-T-Nine Records: 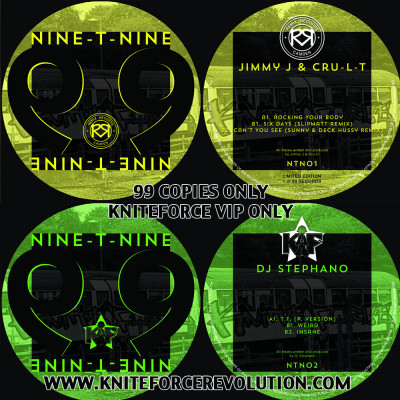 I have been told these two are shipping as part of the 8000 that is on its way. There were a few ideas behind this label, so I wanted to talk to you about them.

1. I wanted somewhere to put music which was excellent, and should be on vinyl, but frankly was never going to make it because we are so busy now.
2. I wanted somewhere to put things that are more experimental, or that were released as digital but really should hve had a vinyl release. There are plenty of older KFAs that fit into that category.
3. I also wanted a label for ALL the labels, hence NTN01 has the Remix Records logo, and NTN02 has a kniteforce logo. NTN can be used for ALL our output.
4. I wanted something exclusive for the VIPers. We set the VIP system up for this sort of thing, so why not use it?
5. I needed something with a quick turnaround, rather than the 9 months or so it takes to give birth to an EP at the moment.

The only way to pull all of this off for me was to get things cut to test press, as that only takes 4-8 weeks from cut to delivery. The trouble is, for my pressing plant, it means we can only press 99 copies. More than 99 is, in their eyes, a "full run". It also means we pay test press costs rather than the cheaper cost of a full run, but a full run means we have to order 300 or more, and can be waiting up to 9 months at this time.

So Nine-T-Nine is the result of all these factors.

Here is what you need to know...They do come with full color labels...but they really are limited to 99 copies. Its actually worse than that because the artist gets his or her copies, and each of the Kniteforce Council gets a copy...so really its about 92 copies that will go for sale. They are going to be more expensive per record because they cost us more to press per record. And they are going to be VIP only. It is, I am sorry to say, blatantly not enough to go around. Especially when you consider we have things like Jimmy J and Cru-l-t on NTN01, and NTN06 is by Ray Keith lol...so the only way to make this fair is, these will be released in pairs, but randomly. They will get NO announcement on the mailing list. And they will go up at a random time on a random day. I will make a single post on Facebook once they are up. This makes it fair on every person in every time zone, you see?

Also, it is a breath of total chaos, which as a Discordian, I worship. Hail Eris.

Lastly, I want to talk to you about the upcoming USB and 12" vinyl Doughboy release on KFA: 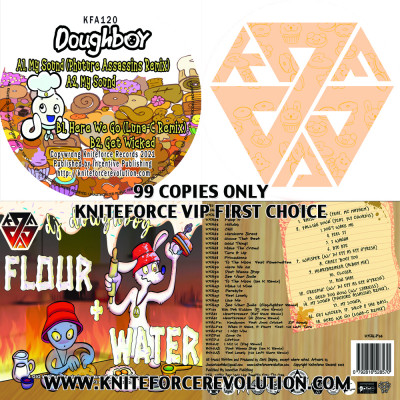 Like the Nine-T-Nine releases above, we will have 99 (err...92ish) copies of Doughboys 12" EP. But that is where similarities end. This one is a bundle of the vinyl and the USB, and its a way to get this fantastic selection of music to you swiftly. Once the USB and vinyl combo has sold out, we WILL be ordering JUST the vinyl, and expect it to land in 6-8 months time. The vinyl has two stunning breakbeat tunes from Doughboy, plus a remix from Phuture Assassins and from (checks notes), oh, me! I did my remix in the 2000's Luna-C style, the older KFA style, so very manic and faster than my more recent output. Meanwhile Phuture Assassins did his remix in the style that I usually call "fucking excellent". Still, thats as it should be - Doughy is one of our most talented artists, and him having his own vinyl release is LONG overdue, and to celebrate that, we thought "lets do a wicked album and a USB of all his work and onus remixes and everything!". So we did. And here it is. I am very proud of it and expect it will do very well.

With this one, we are going to do it as VIP only initially, and then it will be available for everyone.

I was asked if VIP people could get first shot the Dj Force & The Evolution Box Set, and do you know what? I had never thought of doing that, as obvious as it is. And I think it is a good idea for some of the major items that might sell out super fast, so we WILL be doing that in the future, but NOT for the Dj Force & The Evolution Box Set because its not fair to add that suddenly after we have already advertised it and etc. But we will likely start putting up things a day early as VIP only. Once I have thought about this a little more, I will make a post about that and let people know it is happening.

Right, its been a long post, so I will just end with a few more little things. Peas, ants, grains of sand, celebrity opinions and how much I care about football.