Right, we finally have sent out all of the Acen Box Sets. With a few small issues, that went fairly smoothly. We are very relieved to have that done, and are moving on to the next problems haha! 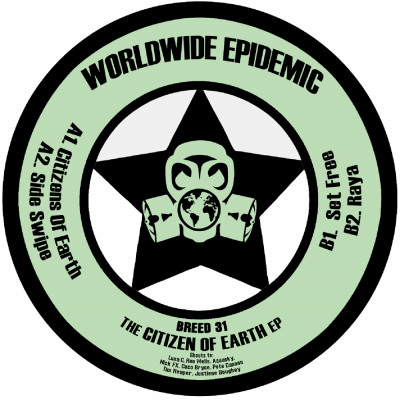 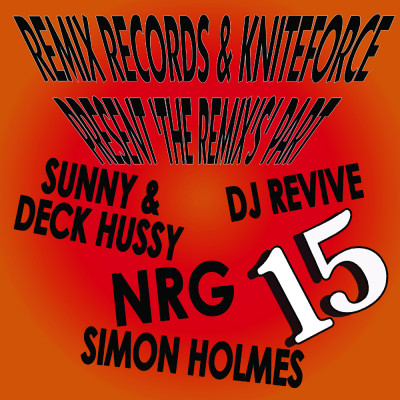 The latest news is we have been told by the delivery company that they were delivered on the 5th of March. Which, if they were, it wasnt here, so I am calling bullshit. We have demanded a proof of delivery, but are getting silence from the delivery company. So I finally lost my rag and said to the pressing plant that the courier has obviously lost them, and it is time for the pressing plant to repress.

At this point I do not know if they will be found and will appear next week, or if we will need to wait for a repress. If they do repress, it will be swift, hopefull 3-4 weeks, but it is still too long.

So here is what we are going to do:

IF YOU ORDERED OTHER RECORDS with BREED31 and KF142:

We will send the missing records as soon as they arrive, either by putting them in another order you make in the future or sending them directly to you.

IF YOU ONLY ORDERED either BREED31 or KF142 or BOTH and NOTHING ELSE:

We will send those records and dispatch the order as soon as Breed31 and KF142 arrive.

Either way, you will 100% get the records. I imagine, as soon as we start sending orders out without those two in them, they will both arrive on our doorstep. but its been three months and enough is enough I think. We cannot wait indefinitely.

I am really sorry for this mess. Like the delay on the Acen box set, it was not of our doing, but still, we took your money then did not deliver as promised, and that is not something I am okay with.

Regular readers will know that we have taken steps to ensure that doesnt happen again and to be more efficient. For example, the latest releases have mostly been sent out, unless they were ordered with a presale item. We are trying to get back to getting orders out fast, within a few days of receiving them. I am very lucky that many KF buyers are super awesome and patient. But still, Kniteforce should be as good as it can be, and the crew and I take a deep pride in the label, so we always want to do better.

One of the changes is that, except on the rare presale orders (such as Baraka and friends recently), we are trying to only sell records that are in stock. Which is why I am excited to tell you that on Friday the 23rd we will be releasing this exciting 4 record combo: 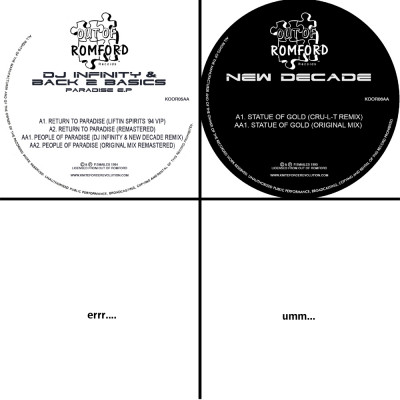 ...yeah... So heres the thing. The two new Out Of Romfords are here, and they are both amazing. Seriously proper good music that should not be missed! I say that even though one of the tracks is a remix I did of Statue of Gold, so its a little arrogant, but sorry, not sorry, the remix is hype, the original tune is maybe a bit marmite, love or hate type biz, but really, if you don't love it then you are wrong lol. As for the Dj Infinity & Back 2 Basics Paradise EP? Brilliant work all around with drums to wake the devil and bass to..errr...tell him to stay where he is cos frnakly we have enough problems thank you. Anyway Chris, shut up.

The point is, we have both KOOR05 and KOOR06 in stock. We also have a bunch of other things in the stock. And we have been told that we will be getting INFL19 (at last), KF133 (at lastier) and K09 (at lastiest) next week. We also have Legends Vs Legend Vol. 4 in stock, the new Dj Ham EP...KFA110 and Scartats EP....So...I really dont know what is gonna go with those two yet. Isnt it exciting? You get to live like me for a bit, never knowing what the hell is gonna happen next haha!

A few weeks after these ones go out, we will be dropping the much anticipated "Hecticly Hectic" Bundle, which features KHECT01R, 03R, 04 and 05, and the bundle comes with a free 7" too. So thats lovely. But again, one thing at a time. Or three things. But certainly not 549 things - thats too many.

And thats all the news for today I think? Nice one,