Before we get into the blog post, a small note: Cindy (Mrs Luna-C) is handling a lot of the orders and replies to people with order questions, but we have noticed less responses than we would expect. Perhaps her emails are going into junk or spam? If you made an inquirey recently and did not get a response, please check those folders :)

It must be Blog O'Clock! And so it is. And this is a very interesting blog, I promise. Weirdly, its all about events....But lets start with a general sort of round up!

As far as pressing goes, we are still awaiting the Ray Keith Box Set, the Dj Force & The Evolution Box Set, and Baraka - A Million And One. I had, of course, hoped to get these out already, but due to the idiotic lack of paper to make sleeves and labels, many pressing plants are just sitting about, twiddling their thumbs. Or so it seems. Personally, as I ordered all three of those records nearly a year ago, I would have thought they could have had the sleeves and labels ready. I would have thought "nearly a year" was enough time to prepare things? But what do I know lol. Anyway, as soon as those records arrive, I will get them out to you.

Of coursxe, you all know that we have been ludicrously busy for months, and this past weekend was more of the same, with the Spiritual Auras and the Out Of Romfords absolutely flying out. Not that I am complaining, it has been quite epic all in all. And I think it is possible these ones will not even go to distribution as we are likely to run out, so if you want copies, now is the time to get em...here is a link to the bundle:

The Moondance & Dope Ammo presents Together 2022 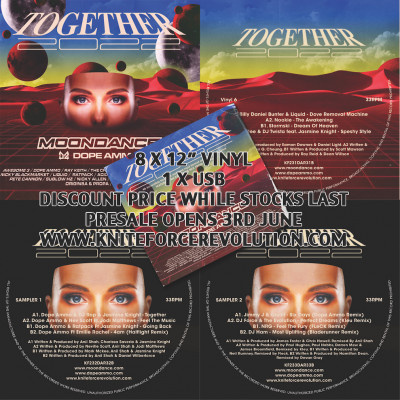 NOTE: OFFICIAL RELEASE DATE is Friday 3rd June, but it will go live on my site on Thursday 2nd of June at 7pm, as always....

This box set is about as epic as any box set we will ever put out I think. It contains pretty much every old skool and excellent artist this working the industry today, from Awesome 3 to Ray Keith to Top Buzz to Ratpack...the list of talent involved is so long that I am not even going to start listing it. I would only miss someone out anyway lol...

As you can imagine, this was a tricky one to put together, and it was mostly arranged by Dope Ammo working with Moondance, who then came to me for the vinyl side of things. And we planned it all meticulously, so that the digital and vinyl could come out at the same time, and all be released together on Friday the 3rd of June.

Bwahahahahaha!!!! Yeah, well. The best laid plans of mice and men and all that.

Well, the world keeps spinning and the album will be released on the 3rd of June, however, the vinyl is not here yet, which means....deep breath...we are opening the pre sale for the vinyl album on Thursday night. OH GOD NO! NOT A PRE SALE? AAAGGGHHHHH!

Yup, I hear you. But wait, come back, its nowhere near as bad as it sounds, I promise! There are THREE big reasons not to be too concerned!

1. This release was ordered in September last year. It is due in July. The pressing plant has said it will be ready in July. Obviously, we can take that with a massive pinch of salt, but I would still expect it to be here in August at the latest. Sure, a lot has gone wrong, and may still do so, but this wont be the everlasting disaster that previous pre sales have been, simply because those went to pre sale BEFORE everything went wrong. This one I knew would be late, and we pushed back the ultimate release date as much as we could to cover for it.

2. You will be able to access the digital downloads immediately upon buying the Box Set - no wiating for those this time!

3. Because we are all sick and tired of the delays and nonsense, we are doing this at a phenomenal price for the pre sale. This is an EIGHT PIECE VINYL set, with a USB, over 45 tracks and a mix, for £85 (plus VAT where applicable). This would usually cost way nore to buy in singled and etc. So thats a huge discount, even more so for those who are VIP on my site....

So I am hoping the above will take any sting out of committing to a small pre sale for this. In the end, there really is not much choice as the release date was decided a while ago, and I am not the person who makes the final decisions on this. If you are still not convinced, here is a glorious video we made about it...

Now for those of you whose pockets need a rest - I hear you. I also need a rest. We all do. So we are going to have a couple of weeks off from new releases after this, and I am going to be taking it easy at the end of the week. We will not be packing orders Thursday 2nd June - Monday 6th June. Its the Jubilee here in the UK anyway, and while I am not that fussed about all that blah, it means banks and post office and schools are closed, so it seems as good a time as any to have a little rest, get some energy back and all that good stuff.... 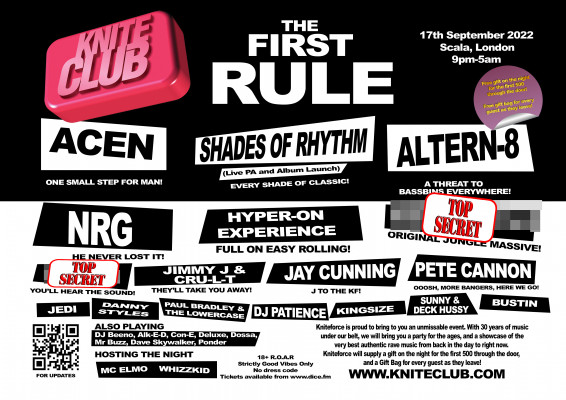 The sales for the tickets have been going really well even before we let you know that ALTERN 8 and HYPER ON EXPERIENCE and JAY CUNNING and MC ELMO and JEDI and DANNY STYLES and all the others are alongside Shades Of Rhythm, Acen, NRG, Pete Cannon, Jimmy J & Cru-l-t...cmon now, thats insane!

I suspect the night will sell out in due course, so it would be wise to grab tickets while you can! Its truly going to be an incredible night, and we have a whole bunch of people coming from all over the world to meet up and hang out. People are flying in from the USA, Germany, Netherlands, Japan, New Zealand, Dubai, France, Jupiter, the list goes on and contains other planets so I will leave it there. Its actually quite jaw dropping! Pretty much every KF related artist that can be there will be, and I think you are going to be coming to one of the best events of the decade, I really do! I cant wait!!!

UNITY IN THE SUN
Lastly, it has been confirmed that Kniteforce is going to be at Unity In The Sun 2023. The details are still being worked out, but it should be something pretty spectacular. So i hope those of you who enjoy things like Unity, and, err....The Sun (not the newspaper, the big yellow hot thing in the sky) will join us in Corfu for a week of...err....unity. And sun. haha. :) 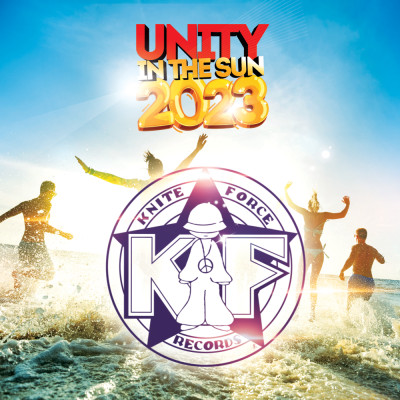 GET YOUR TICKETS NOW!

And thats the entire blog for the day!!!