All the news and excitement!

Sorry for blog that is likely riddled with spelling mistakes and errors. I am writing it in a very short period of time while waiting on a phone call from Liquid about his forthcoming and stunning new album, and Jimmy J arriving in the studio.
I meant to write this on Monday. Its now Thursday. Time is not on my side recently.
So anyway, enough blah. Let me hit you with all the news!

First up, some updates.
Vinyl is still being idiotic. KBN09 - Phat & Phuturistic was pressed and sent 2 weeks ago. But its not here yet. Where is it? Yes. Meanwhile, KBOGR46T - Baraka  is also STILL not here. I was told that despite being massively over burdened with orders, the pressing plant isn’t even at full capacity as they cannot get enough of the pic plastic to press the vinyl. We use MPO, one of the worlds largest pressing plants - so its not like some pokey little pressing plant. This situation? Its the new normal. Not only that, they ar enow having trouble sourcing materials for sleeves etc. In case you want to read more about all of this, here is a good article:

Wow, this is terrible (my title lol)

Obviously we will get the records to you as fast as we can. We have nearly 1500 orders for Baraka, so trust me when I say we are desperate to get this release sent out. But as I have said before, we are at the mercy of things we cannot control. Lets hope they get here soon, its all we can do atm.

In happier news, coming on the 26th of August, we have some very special treats!
Two long time artists that have appeared on various of our labels, make their debut on Kniteforce Records! They are of course the incredibly talented Dj Beeno, and the also incredibly talented Sunny & Deck Hussy.
KF127 Sunny & Deck Hussy is actually in stock. Dj Beeno was sent at the same time as KBN09 so it should be here any day. But both are smaller, 300 only runs, so you will need to get these fats if you want copies…demand is so high now, but these were ordered months ago, and I couldn’t up the orders. Also, its now usually about 6 months before a repress can arrive. So yeah…I know I always say get in, but, err, get in! 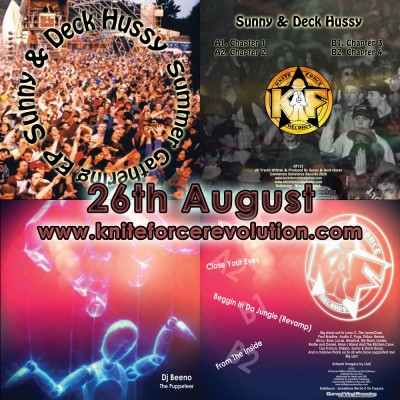 Some of you might have noticed a post I made about new digital releases…well…while I have no intention of slowing down or stopping vinyl production, we discovered an amazing thing. You can get a USB drive, filled with music, and have it packaged in a CD case, so it looks lovely. AND this can be sold via distributors, should I decide to do so. Its a new format with a lot of potential.
Have a look at this: 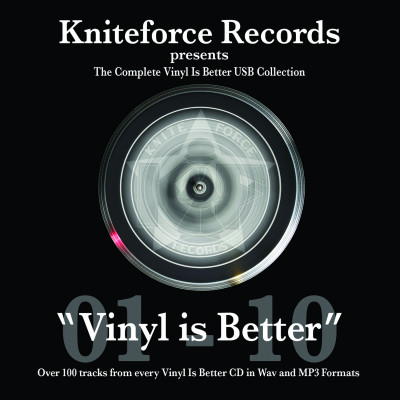 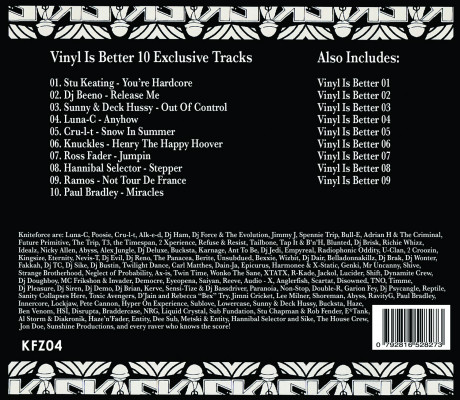 This is Vinyl Is Better 10. Now, VIB 10 was meant to be a CD, but we thought, lets try a thing. So on the 26th of August, this will also be available to buy. It contains 10 brand new tracks, but over 100 tracks in MP3 and wav format in total - all the previous Vinyl Is Better music in a single place. I think that’s pretty amazing. I am going to release this slightly on the 26th of August, and ion it does well, there are other things in the pipeline… 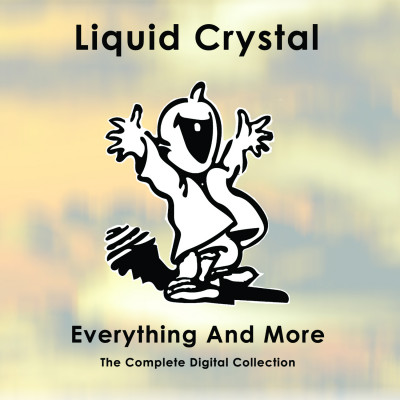 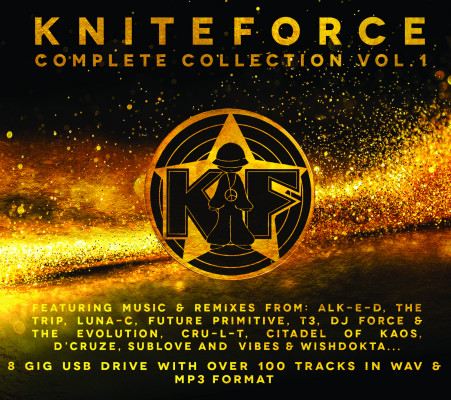 There is so much we can do with this format. Already we have plans to use this for Kniteforce Radio All Stars Vol. 3, and I have spoken to Acen, and we are considering a “Complete Acen” USB after his next Box Set. Thats the beauty of this format, you can fill it with excellence, AND you get the nice packaging and artwork, PLUS a reusable USB drive.
We are doing one of these WITH the forthcoming House Crew box set, and with the Dj Force & Evolution Box Set, so you can get a complete Dj Force & The Evolution back catalogue (Plus new remixes). Oh, yes, speaking of that, sorry, we aren’t presaling that box set yet, obviously. I have instead decided to order 500 and hope for the best on that one haha!

I mean, this all depends on the support we get on it - if you buy this, we will do more. If you don’t, we won’t lol. But I dunno, I think this is pretty exciting and has a lot of potential!

Okay, Jimmy has arrived and I still have a ton to do. But a few hit points:

The House Crew Box Set test presses are imminent.
Liquid has an album coming, I will blog about that next week.
Jonny L - Hurt You So and Remixes is set for a 1st October release!
I have signed a bunch of epic new jungle tunes from Ray Keith.
The Moondance Box Set and samplers have gone into production.
The ticker hasn’t been updated.
Im tired, haha/

Lastly, I can’t always tell you about everything in the works, but I think of you all as my sisters and brothers, so don’t be grim. You will all be ecstatic about some of the solo projects coming up. Heh.